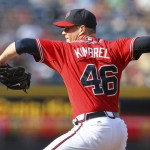 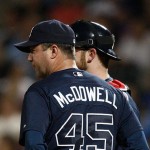 Well, this is embarrassing. Seems I failed my job interview with the Atlanta Braves. Thought it was some kind of April Fool’s joke.

I met with the Braves on Friday afternoon. They were back in Atlanta for a couple of days of practice between spring training and opening night. Networking was the key to setting up the meeting. General Manager Frank Wren lives here in Peachtree City, and it turns out that we have a mutual friend.

Anyway, I met with manager Fredi Gonzalez and pitching coach Roger McDowell at Turner Field. We didn’t talk long; I wanted to tell them about all the blogs I’d read and webinars I’d watched about pitching. They just wanted to see me pitch. We left Gonzalez’ office and headed out to the bullpen.

Bullpen coach Eddie Perez had his catching gear on and set up behind the plate. An assistant held up a radar gun. I threw my first pitch. They said it was 61 miles an hour. I said there must be something wrong with the gun; I was expecting to throw in the low 90’s. I tried harder next time. That one was 58 miles an hour. The guy with the gun pointed it at a pitching prospect who was on the mound next to me. He threw a pitch at 93 miles an hour. Guess the radar gun wasn’t malfunctioning after all.

All these thoughts were racing through my head. “What am I doing wrong?” I went over all the things I’d read about or watched on how to get the most leverage, torque, and arm whip to maximize speed. I tried even harder on the third pitch; 57. Seems the harder I tried, the slower I threw. I think I saw closer Craig Kimbrel snickering a little bit.

Finally I told them that I’m not really a power pitcher; I’m more like Greg Maddux. I’m going to strike batters out with my craftiness – movement, location, and change of speed. The assistant put down the gun, picked up a bat and stood in the right-handed batter’s box. Gonzalez said, “Okay, the count is 0-2; throw a slider down and away just outside the strike zone.” I came set, went into my wind up, and hurled my slider to the plate. It was up and in. Ball one. More snickers.

Again I reviewed all I’d read about how to maximize control. I’d even gotten a refresher this past week from Doug Brantley, owner of Five Star Baseball & Softball here in Peachtree City. He told me not to forget the three imperatives of great location: put your front foot down in the exact same spot on every pitch, keep your chin over your front knee, and use the exact same arm slot and release point on every pitch.

“Okay, 1-2, you can still get the hitter out; another slider down and away.” My second pitch was halfway between my target and the location of my first pitch. In other words it was belt high right down the middle. Kimbrel whistled like a bomb was falling and then made the sound of an explosion. I’d crashed and burned. Gonzalez and McDowell said they’d seen enough and told me I should consider another career.

Several of you pointed out after my post last week that I’d never stepped onto a field or picked up a ball in my quest to be the Braves starting pitcher. I scoffed at you guys because you wanted me to practice. I thought if I could just get an interview, I would do great when it really counted. I hate to admit it, but practice really is key if you want to win a job in the Major Leagues. Maybe I should have paid for a few lessons with Brantley.

Come to think of it, practice is the key if you want to win a job in a normal company or organization too. I know that many of you are reading blogs, watching webinars and participating in free seminars. Maybe that’s not enough. In fact, maybe these things are giving you a false sense of security – just like I had with the Braves.

Today I’ll be watching Braves opener on TV just like the rest of you; and thinking of what might have been.

What are you doing to prepare yourself for your tryout?