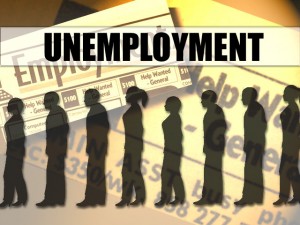 Unemployment is unchanged at 8.2%

The unemployment figures came out this morning. Here’s the official report without the media spin:

Nonfarm payroll employment continued to edge up in June (+80,000), and the unemployment rate was unchanged at 8.2 percent, the U.S. Bureau of Labor Statistics reported today. Professional and business services added jobs, and employment in other major industries changed little over the month.

The number of unemployed persons (12.7 million) was essentially unchanged in June, and the unemployment rate held at 8.2 percent. Among the major worker groups, the unemployment rate for blacks (14.4 percent) edged up over the month, while the rates for adult men (7.8 percent), adult women (7.4 percent), teenagers (23.7 percent), whites (7.4 percent), and Hispanics (11.0 percent) showed little or no change. The jobless rate for Asians was 6.3 percent in June (not seasonally adjusted), little changed from a year earlier.

In June, the number of long-term unemployed (those jobless for 27 weeks and over) was essentially unchanged at 5.4 million. These individuals accounted for 41.9 percent of the unemployed.

Both the civilian labor force participation rate and the employment-population ratio were unchanged in June at 63.8 and 58.6 percent, respectively. The number of persons employed part time for economic reasons (sometimes referred to as involuntary part-time workers) was essentially unchanged at 8.2 million. These individuals were working part time because their hours had been cut back or because they were unable to find a full-time job.

In June, 2.5 million persons were marginally attached to the labor force, down from 2.7 million a year earlier. (These data are not seasonally adjusted.) These individuals were not in the labor force, wanted and were available for work, and had looked for a job sometime in the prior 12 months. They were not counted as unemployed because they had not searched for work in the 4 weeks preceding the survey.

Among the marginally attached, there were 821,000 discouraged workers in June, a decline of 161,000 from a year earlier. (These data are not seasonally adjusted.) Discouraged workers are persons not currently looking for work because they believe no jobs are available for them. The remaining 1.7 million persons marginally attached to the labor force in June had not searched for work in the 4 weeks preceding the survey for reasons such as school attendance or family responsibilities.

23.4 million Americans are in the underutilized workforce

And here is a chart you won’t see anywhere else: a stacked chart of the underutilized workforce for the past 15½ years. The green area is the well-known unemployment rate, the purple area represents Americans who are working part-time that would rather be working full-time, and the blue area represents those who are marginally attached.

The BLS defines marginally attached as, “Persons not in the labor force who want and are available for work, and who have looked for a job sometime in the prior 12 months (or since the end of their last job if they held one within the past 12 months), but were not counted as unemployed because they had not searched for work in the four weeks preceding the survey.” 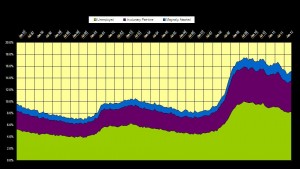 As of today, those figures (in millions) are:

Soon I will blog about a large group of Americans who don’t appear anywhere in these statistics. This is a group of people that the BLS would count as a success, but are struggling to get by.

What do you think of all this?